skip to main | skip to sidebar

Had a chance to stop in at the Digital Henchmen launch party last Thursday night @ Club SAW here in Ottawa. Didn't see too many from the animation community, but there was a good turnout and much fun to be had (despite the lack of a liquor licens

e).
The Henchmen put on a good party, I'll say that for them. Good door prizes and a heck of a show, the highlight of which, for me, had to be Halifax Rap Legend Jesse Dangerously. As a brother in girth, it was great to see this man rock the mic. His rhymes were solid, peppered with the requisite amount of humour and nostalgic pop references, and his stage presence is undeniable.
As for the video the Henchmen were premiering? I think it's only fair to approach this as a review.
The Digital Henchmen are three guys who've been in the business of television animation for about three or four years each. They've worked on a few decent productions, mainly at Mercury Filmworks here in Ottawa. They've decided to get out on their

own and focus on shorter form work. As their first official collective effort, they've put to gether a music video for local band, Amos the Transparent. The song is great, if not a little haunting.
I'd seen the trailer the boys put together, and I was a bit hesitant. I like these guys and applaud what they're doing, and would love to give them a shout out here. From the trailer, I was a bit concerned. The animation and art direction left me a little cold. The character designs are largely uninspired, the animation is seviceable but lip-synch is poor, and the colour design exposes a lack of understanding of colour theory.
BUT.
I was pleasantly surprised by the finished product.
My criticisms remain. Those are all areas the Henchmen will have to work on to be competitive. But the finished product, the video itself, in a whole, was thoughtful and enjoyable. There was something in the concept that these lads were able to capitalize on and communicate. The pacing was effective and their adherence to the narrative overcame the cosmetic issues I had with the piece.


There's plenty to tear apart, for sure, but for a maiden effort, I think the Digital Henchmen did a fine job. These guys still have a lot to learn, and I hope they find opportunities to keep learning, because if the day comes when their practical skills match their creative intention, they'll have found their niche.
Good luck to Jordan, Steve and Darren. These are less than perfect times to launch a new business. I hope they have what it takes to keep the band together.
m
Posted by michael valiquette at 12:24 PM 2 comments:

So I mosey'd back on over to Indieanimatornetwork and registered. I did so in order to contact Johnie Tidwell, the name behind the page in question. Well, while I waited for my registration, Johnie, to his credit, got in touch.
Here's what he had to say:

I am writing you, because I came across your post on your site regarding the C.A.R. news feed on indieanimator.com - whether it is complimentary or theft. We hope that you find it as complimentary, but I will understand if you are conflicted with being feed through this site. We have no intention of presenting your blog as a product of IA.com. Your feed was only added maybe a week ago to encourage the members to visit resourceful links and blogs on the net. We are fans of your coverage on interesting topics within the animation industry and community

IA.com started about a year ago as small group networking with other animators and to provide a platform to advocate the independent animators. There are not a lot of online platforms on the net to connect other than facebook and myspace - so ning provided the best option for us. Our purpose is to mainly empower the animator and find others that share our interests. We were happy to be under the radar, but it seems that more people are taking notice which is fine. There is a lot of talent out there and it is a shame that the commercial animation takes most of the lime light.

We do not want to take credit for your hard work and will be happy to release the feed. This is not our intention to steal, but only to share information to our members to become followers of various blogs we like to read.

If you would like us to minimize the feed to the sidebar or exchange the feed into a logo link to your site - we will be happy do this as well. Or we can just delete the entire feed all together. It is your decision either way - we welcome you to still be apart of the indieanimator.com community.

Let me know what you think?

Good for Johnie for taking this step. He's put his page together for much the same reason I did mine. I still would have appreciated this contact before the feed went up though. I'm glad he finds value in what I'm doing here and that he saw it worth posting. But selfishly, I'd like people to be reading it here. As someone who is seeing this hobby turn into an occupation, numbers are something I have to consider. That being said, it's my pinko zeal for sharing information and experience that got me doing it in the first place. So I'm considering my options here.
I'm sure we'll figure something out, linksharing is a very common practice, and the whole point of this blog is to share. So it looks like Johnie and I will have a conversation. I'd like to know if he's contacted his other feeds, although most of them are not featured quite so prominently. Either way, he writes a pretty good letter and his his complimentary approach certainly won him my ego's vote.
M
Posted by michael valiquette at 9:59 AM No comments:

Indieanimatornetwork, is this complimentary, or just theft?

I came across this site while browsing referall pages. I'm a little torn about posting the link, because I 'm not sure I want to send them traffic. There's lots of stuff to se and read, and a lot of it very informative. For my taste, it's too busy and, like AWN, tries to do too much.
But.
As I scrolled down to find where they had, presumably, posted a link to some content I featured, I cam across the "Canadian Animation Resources Feed".
This confused me. I assumed that I'd see a snippet of something from the blog. A piece of an article with a link. I've seen that kind of thing before and really enjoy it. It feels great to find that something I wrote was significant enough to someone else to sample it. But as I continued to scroll down, it got a little weirder for me. The ego stroke was replaced with a sinking feeling. This wasn't a quote, this was my whole blog, reproduced here and comprising about a quarter of the content on this page.
How do I feel about this?
I really don't know.
I work pretty hard to put this site together. I do my best to update the job boards, provide links, and generate original content. Some of what I do is just referal, so I don't want to over-react. But this feels like more than that.
I haven't gone through everything on the page yet, but I did notice the jobs section is taken entirely from Ani-Jobs.com. There seem to be original posts on there, so it's not like the admin is just "borrowing" from other sites. But I'm uncomfortable with the extent to which I've been co-opted. Maybe if I'd been contacted, if there'd been a request, I'd be ok with it. But now I'm not so sure.
I'd love some input on this one guys.
Posted by michael valiquette at 6:44 AM 7 comments: 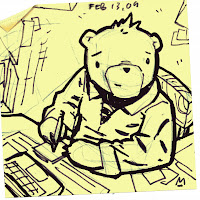 As the content of the site continues to broaden, I've decided to add this additional page for the special features. The main blog on the home page will continue to carry From The Internets, events, notices, and other general information. This page will be the home for the interviews, the regional coverage, reviews and any other content that doesn't fall into those categories. I'm hoping that adding it to the front page like I have works layout-wise, but that's something I'll have to figure out.
Here's what I'm working on right now:
Plus a few others. If anyone has anything to contribute, contact me directly. Your help is always appreciated.

Thanks,
m
Posted by michael valiquette at 11:46 AM No comments: